As a medieval capital second only to Anuradhapura, Polonnaruwa is distinguished for its well-preserved ruins such as the Polonnaruwa Vatadage reflecting Sri Lanka’s ancient history, dating back to the Anuradhapuran era making it one of the best cultural places to visit. The city earned its recognition as an important local commercial centre replacing Anuradhapura which was ravaged and left for ruin.

As a medieval capital second only to Anuradhapura, Polonnaruwa is distinguished for its well-preserved ruins reflecting Sri Lanka’s ancient history, dating back to the Anuradhapuran era making it one of the most cultural sites. The city earned its recognition as an important local commercial centre replacing Anuradhapura which was ravaged and left for ruin. The golden medieval era during the 11th to 13th centuries was glorious and successful though brief, heralded the grandiosity of Sinhalese kingdoms and widespread Buddhist civilisation.

The splendour of that era can be found in the monumental treasures that stand on the east shore of a large artificial lake, the Parakrama Samudraya, a notable landmark of Polonnaruwa which was built by King Parakramabahu I during his reign in the golden age of Polonnaruwa. You can find ruins of a palace, a gigantic stupa, beautiful striking statues and an unusually built structure which is beyond explanation.

At the south end of the lake, there is a standing statue of King Parakramabahu carved out of rock. Another set of impressive ruins are the sculptures at the Gal Vihara. These sculptures were cut into granite stone during the middle of the 12th century. The whole carving is made of four enormous statues of Buddha in different positions.

All of these ruins can be viewed in the city.

King Parakramabahu In was regarded as the last great king of Sri Lanka and the real hero of Polonnaruwa since he had luxuriously developed the city which had gradually evolved into a worldly city with influences of South Indian and Sinhalese Buddhist cultures.  Using advanced technology of the time, the king had created efficient irrigation systems that used and distributed all rain water collected to the entire district. The Parakrama Samudraya was considered one of these greatest developments since it provided water for agriculture during the dry seasons and it also had provided security against invaders serving as a moat. Therefore, in its prime, Polonnaruwa’s strategic importance as a secure station for armies gave it the name Kandavuru Nuwara (Camp City.)

King Parakramabahu I was succeeded by his nephew, King Nissanka Malla who continued the development and expansion of the city.

Unfortunately, several invasions from South India caused the collapse of Polonnaruwa which was left for ruins to the jungle.

How to get there

There are many options of travel to Polonnaruwa by train, bus, taxi, air and road. One of the best ways of getting there from Colombo is by train. From Colombo Fort Railway Station you can reach Polonnaruwa in approximately six hours and there are train rides four times a day. Alternative options are by bus in which you can take from Pettah Bus Station in Colombo which would take approximately six and a half hours. You could also rent a car and drive which would take four hours if you go via Ambepussa-Kurunegela-Trincomalee Highway (A6) and. A tour consultant at Epic Sri Lanka Holidays could arrange a car for you. There are no direct flights to Polonnaruwa but there are options via different cities in which Epic Sri Lanka Holidays could make arrangements for you.

However if you plan to go to Polonnaruwa from Kandy, you can take the bus which occurs once daily and takes four hours. If you opt to travel by road, the A9 Kandy road is the route to take. If you are in Sigiriya or plan to tour Sigiriya, Dambulla and Polonnaruwa from Kandy you could rent a car and visit these cities since they are in close proximity within the Cultural Triangle. Your Epic Sri Lanka Holidays Tour Consultant can make arrangements for you if you choose to rent a car.

Since Polonnaruwa is located within the Cultural Triangle which is a dry zone, there is hardly any rain and the air is usually arid. The hottest month is May with an average temperature of 29’C and the coldest is in January at 25’C with the most daily sunshine hours in March. October is the wettest month with some rainfall. However, the best time to visit Polonnaruwa is from May to October.

The food available in Polonnaruwa is mostly rice and curries. Tourists have recommended the following restaurants for great local cuisine which are Jaya Food, Priyamali Gedara and Gami Gedera. There are many other cafes and eateries available.

Parakrama Samudraya – Famed as a custodian of Buddhism and for the advancement of irrigation, King Parakramabahu’s greatest triumph was the construction of a reservoir which covers more than 2400 hectares. It was named Parakrama Samudra, which means Sea of Parakrama since it is gigantic in size.

Royal Palace – King Parakramabahu’s great palace was a huge structure although nothing remains of its seven stories today but the massive walls depict the spaces which had the floor beams for at least two more floors.

Audience Hall – The Audience Hall was situated close to the Royal Palace. The large pavilion has intricate carvings that have sophisticated elephant friezes and columns with each elephant posing in different ways. Impressive sculptures of guardian lions sit atop of the steps with their paws touching an ancient inscription.  The great king held council meetings with his ministers in this hall.

Royal Bathing Pool –  In the corner of the palace grounds, you will find this bathing pool. The water flowed through stone channels and then through a dragon’s mouth into the pond. At one end, there lies a stone chamber but in the centre of the pond there is a huge stone lotus with brilliant raging lions at the corners.

The Quadrangle – The focal point of the old city refers to the Quadrangle also known as Dalada Maluwa, which is a sacred complex comprising the ruins of Polonnaruwa’s amazing buildings, such as the circular house of the Polonnaruwa Vatadage which is renowned for its splendid carvings; the well-preserved image house of Thuparamaya which depicts the best example of a gedige reflecting Sinhalese architecture; the exquisite carved columns resembling lotus buds atop of spiral stalks with a stone latticed fence of the new architectural styled building of Latha Mandapaya (Floral Altar); Atadage, the first Temple of the Tooth; the relic house of Hatadage is similar to the Atadage in design, concept and purpose; an enormous book carved out of rock called Gal Potha, Stone Book which has inscriptions of the deeds of King Nissanka Malla; an unusual oriental styled building of seven stories, the Satmahal Prasadaya; and in the south of the Quadrangle there is a Shiva Devale built with Hindu traditions.

Rankoth Vehera – The 4th biggest dagoba in the country and was built by King Nissanka Malla to follow the tradition of early stupas built in Anuradhapura. There are image houses and flower altars that surround the dagoba.

Pabalu Vehera – This stupa, Pabalu Vehera was built by Rupavati, one of the queens of Parakramabahu I according to historical chronicles. Its original name is still unknown but the present name; Pabalu (meaning, beads) was given because a large number of small glass beads were found during the excavations in the vicinity of the monastic complex.

Lankatilaka – The soaring walls of this image house reaches 16 metres high and there is a huge headless Buddha image and superb murals within this still impressive structure.

Kiri Vihara (Milk-white Vihara) – This milk-white shrine is the best preserved dagoba in Polonnaruwa. The building was found unscathed when the jungle was cleared away even after it was built 700 years ago. The dagoba was named Kiri Vihara due to its gleaming white exterior and it was built by Queen Kalinga Subhadra Mahadevi who was a consort of King Parakramabahu

Gal Vihara – North of the Alahana Pirivena Complex are the ruins of another monastic complex, the Uttararama Monastery. Part of this collection is the Gal Vihara with its world renowned statues. There are four figures of the Buddha carved out of a small cliff face of granite, which are considered to be the best rock sculptures in the island.

Nelum Pokuna – Nelum Pokuna, the Lotus Pond is a beautifully carved granite pond that was constructed into the shape of a Lotus flower. There are 7 ponds altogether with the main pond. It has five levels with eight petals.

Tivanka Image House – This building built with brick has an extraordinary image of Lord Buddha posing in three different angles. There are vivid and colourful murals and paintings; some are with lions and dwarves.

Pothgul Vihara – This is the oldest library and monastic complex found in Sri Lanka. Pothgul means a place to store books. This was built by King Parakramabahu I and then renovated by Queen Chandrawathi who was a consort of the king. This structure is a gedige type built in a square set of foundations with a circular structure in the centre.

Giant Statue – Close to the Pothgul Vihara is an enormous 12th Century statue of great artistic skill. The stately but reverent sarong clad figure is carved out of a wall of rock, holding a manuscript. It is popularly thought to represent Parakramabahu I.

Nissanka Malla’s Royal Palace Complex – An unusual structure called Nissanka Latha Mandapaya was built by Nissanka Malla which is located near the western side of the Quadrangle. This building was used to listen to the chanting of Buddhist inscriptions. It has an elevated platform with eight granite columns and surrounded by a low wall. A beautiful monument created by King Nissanka Malla is the Nissanka Raja Sabha Mandapa. It is a royal audience hall which was built as a separate building but a part of the palace complex. The only remains of this hall are the appealing stonework. This structure is made of granite that is intricately carved and the front is guarded by detailed lions that sit on the top of the stairway. 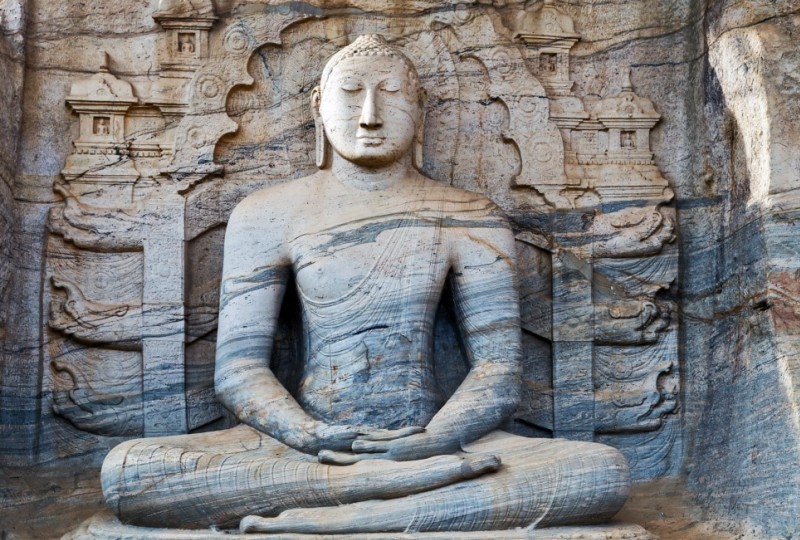 Gal Viharaya and the Alahana Pirivena group
A group of monastic complexes which include the renowned Gal Vihara with its extraordinary rock carved Buddha statues.
Find Out More 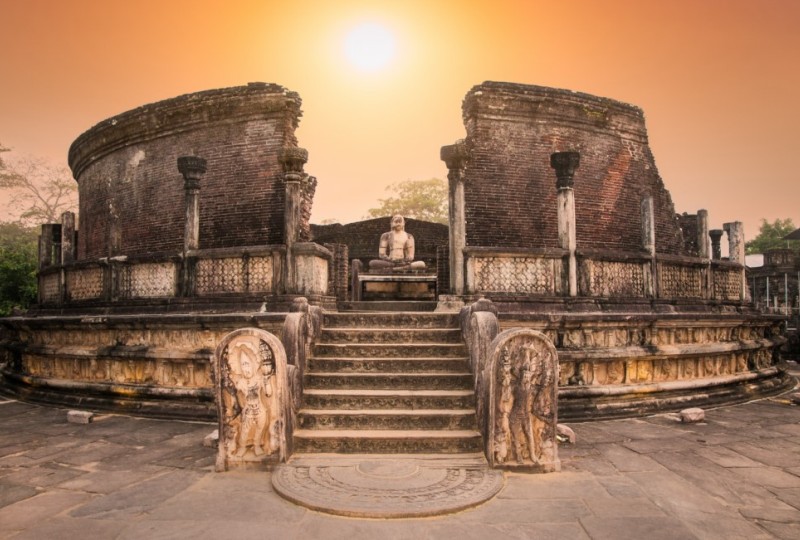 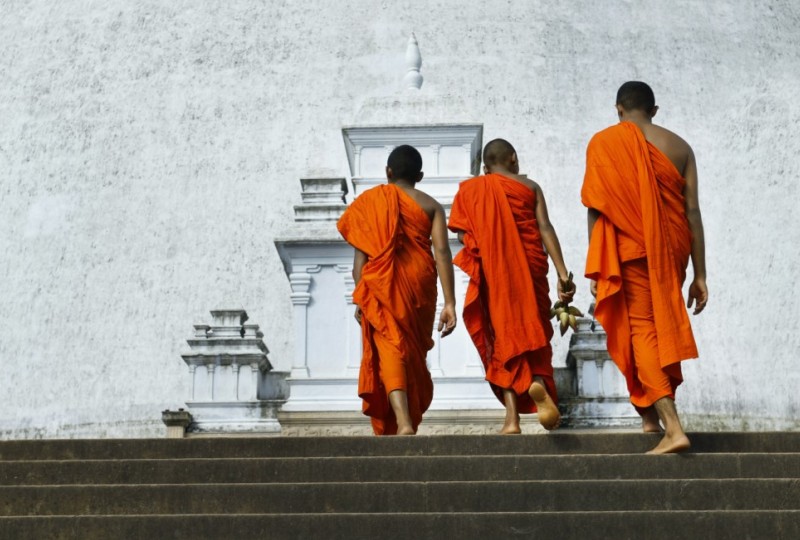 Jetavaranama Stupa
Built in the 3rd century, the magnificent Jetavaranama stupa was the largest brick structure in the world.
Find Out More 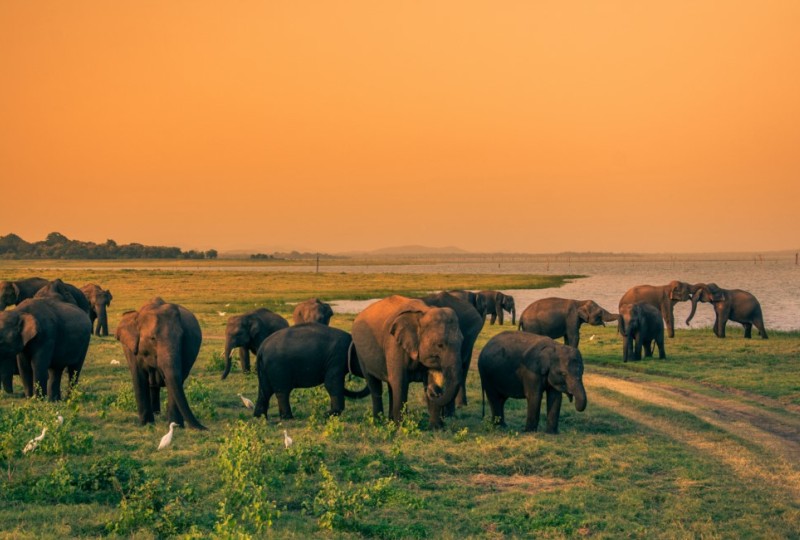 Kaudulla National Park Safari
A safari tour through Kaudulla national park, a popular excursion for elephant lovers since the place is an extraordinary phenomenon
Find Out More Mahamewna Park
This Mahamewna Park is a pleasure garden which was created by King Mutasiva in the early 3rd century.
Find Out More 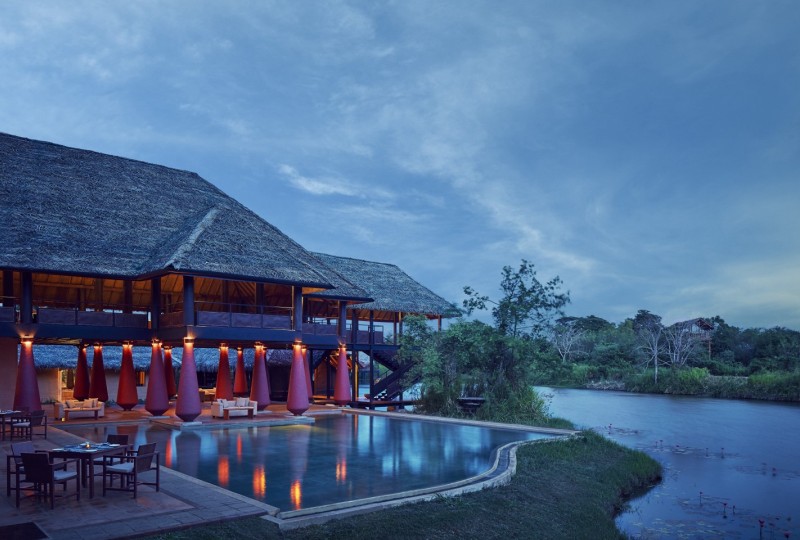 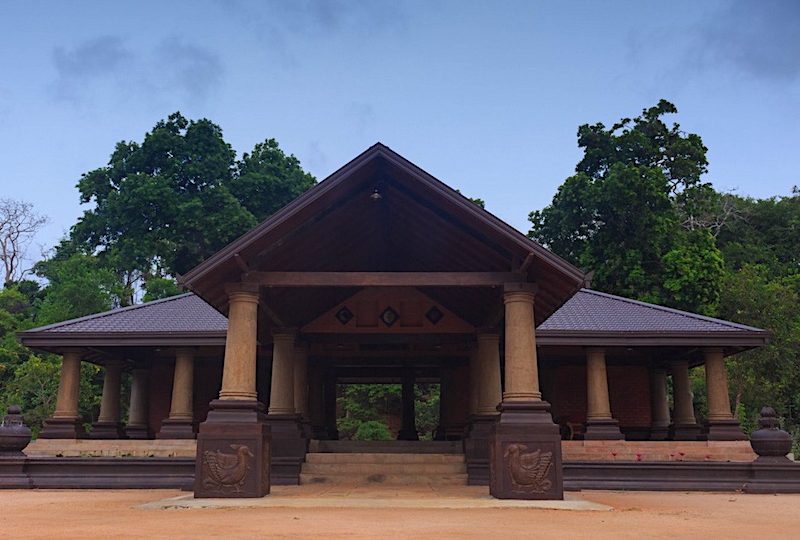 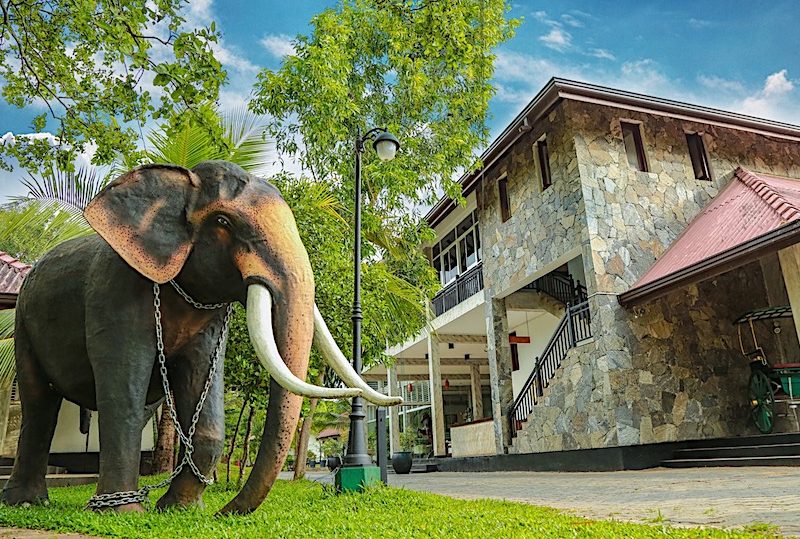 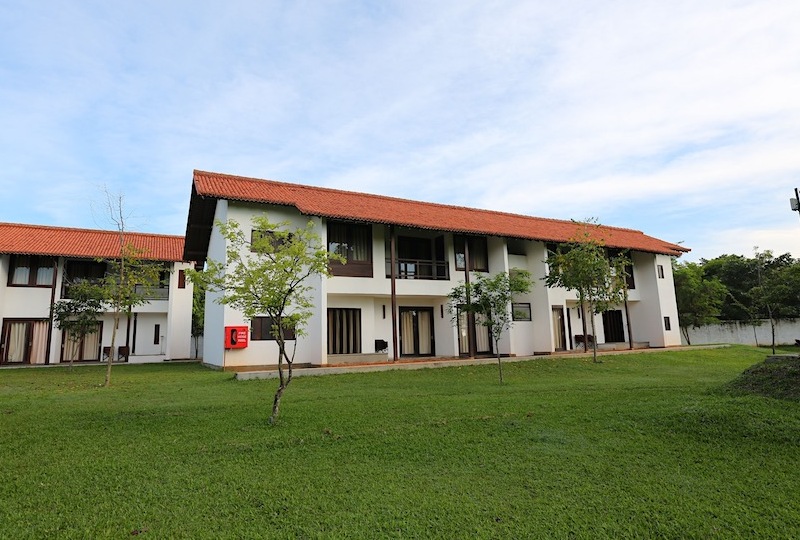 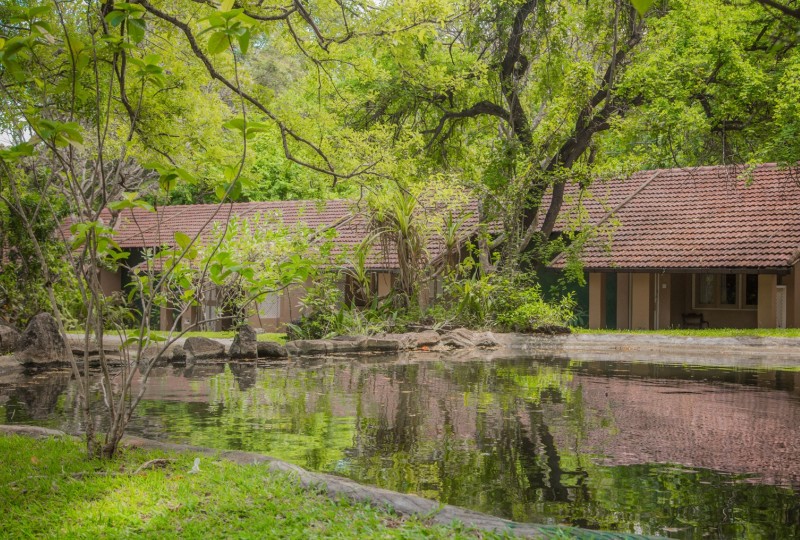